Living, as we do, very close to the Bay of Fundy which boasts the highest (and the lowest) tides in the world, twice a day we are able to walk far out along the bottom of the sea bed to the edge of the receding water. It is a strange feeling, knowing that within a few short hours the water will be many feet, even meters above our heads as we walk out on the hard sea bottom. It is a constantly shifting underwater landscape, with the perpetual motion of the waves sculpting the sand and rocks into new formations twice a day, every day. The movement of the water doesn’t allow for anything but buried sea creatures and crabs to remain for long. It gives a clean sweep, every 12.5 hours. Here it looks as if the sand has taken the form of the receding waves themselves. This is Kingsport Beach, about 10 minutes from where we live.

On our recent trip along the shores of the Saint Lawrence river, wending our way to Quebec city, we stopped to watch this flock of snow geese wading through the marshy mud flats, feeding on he various aquatic plants, grasses etc. I was mystified by the black legs as the bird is described as having pink ones, until I realized that they were probably just covered in black mud! Snow geese, according to my birding app, pass through on their way in a Spring migration, and this was a first sighting of these birds for me. According to iBird, during the summer their heads are often stained red from gathering food in iron oxide laden mud.

Across the river you see the mountains of the opposite shore rising out of the mist, with the last of the snow trails just visible.

Don’t you hate it when there is a gorgeous sunset you can see happening, but the foreground just is not going to give you a great photo of it? On this particular occasion, the sky was beautiful, but I was right on a residential street in the busy town of Uxbridge in Ontario. I decided to take multiple shots of this from many different angles and blend them, hoping to get rid of as much of the distraction as I could and just have the ‘focus’ be on the light through the trees. When one of my friend’s neighbours saw me trying to get a better angle on the sunset, he even invited me into his backyard to see if it was better from there. Aren’t people great?

Have a great end to your week, everyone!

These multiple exposures are all on my “When Life is a Blur’ gallery here: https://elliekennard.ca/ekgallery/when-life-is-a-blur/ 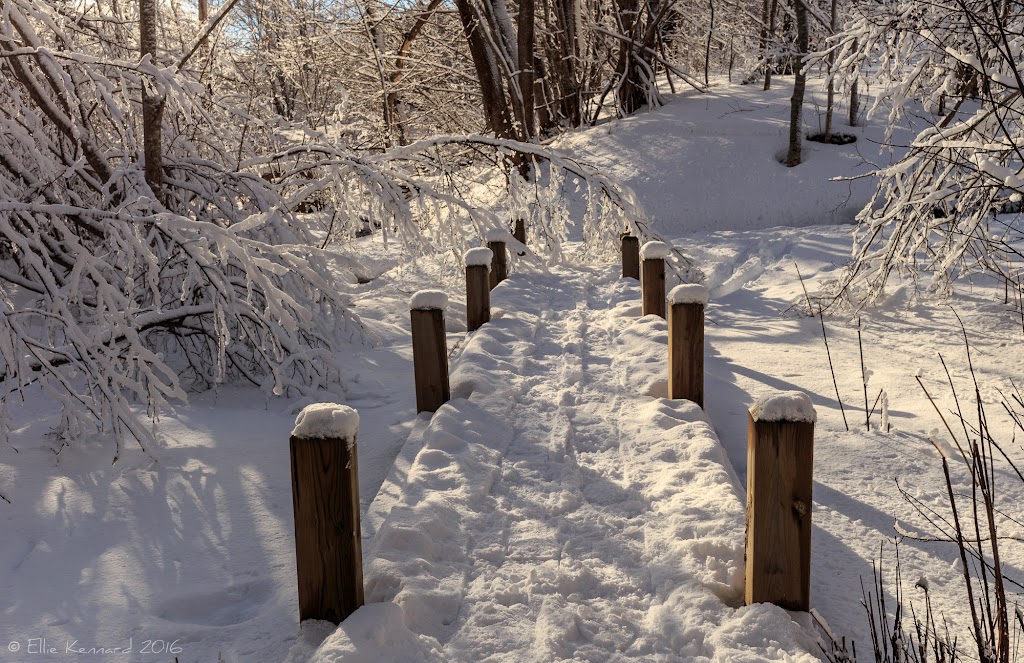 Life and Nova Scotia weather have a way of surprising and delighting you. Yesterday the snow had entirely melted leaving behind only the dull brown of mud and winter grasses. It was really too early for Spring promise and the world seemed to have been caught in a state of embarrassing unwashed undress. Then, as though she had coyly pulled her fluffy white eiderdown over her, this morning she looked all resplendent once again, her nakedness buried in a modest covering of white.

Yes, the Spring will come, with the green pushing through to quickly cover the mud and dead grasses. Just not yet.