In 2013 I took part in a mentorship Entitled Storytelling Landscape Photography and this was one of the photographs that resulted from one of the final weeks of that experience. The full experience is below, as I really want to remember all of the wonderful things I learned, but feel free to just enjoy the image for its own sake!

I am now deep into the Storytelling Landscape Photography mentorship.

One of the things that I have learned in week #8 of this wonderful program is how to give myself the best chance possible of getting exactly the scene I have in mind. For example, I started planning (believe it or not) a month ago, on June 22nd to get this. We had no super moon that night in June as it was raining with low cloud. So I used a special app I have (Sun Surveyor) to determine when the next one would be and found it was to be on July 23rd.

Before the day I gave careful thought as to the type of scene I wanted to record as a setting for this moon and to what would be the story of my image. I had to check the time of the moon rise, of course and I used the same app to tell me what time and direction the sun would be setting.I knew from what I learned that if conditions were right, there was a chance that the sky might be tinged with pink from the sun which was about to set behind me. I needed to know if the tide would be high, low or exactly at what point it would be at that time of that day (Tides and Currents app) to plan for the foreground elements. I also needed to know what exact spot the moon would be rising at. I used the app in conjunction with Google maps to plot the course of the sun and moon and I used the weather apps to determine, as the day got nearer, what kind of a night it was likely to be.

On the day before this, we did a ‘dummy run’ and I scratched my first choice of location off the list, as the foreground was likely to be filled with cars and the middle ground to look rather dull. We drove further up the coast using the apps and map and found what we knew would be the perfect location for what I had decided I wanted to feature – rock formations of the NS coast, sand and sea – and of course the super moon! I took a few hand held photos to get the feel of the place. We needed to ask the permission of the landowner of the cliffs we were to walk along, which we got.. and all was in place.

As we were eating supper, the sky clouded over. The weather app said ‘clear’. I trusted the app. We set off. Properly attired (covered head to toe against the mosquitoes) we parked the car and pointed the app (camera mode) at the horizon, plotting the exact point in the scene where the moon would rise. We walked along the cliffs on to the spot where it would all unfold in front of us, chose the position of the supporting elements and …. waited for that moment.

We watched the sun behind us go behind the hills (as predicted) the clouds before us become tinged with pink (check) and at the precise moment (8:34) when the moon was to rise….. It didn’t! Well, it did, of course, because such things are set in stone and can be utterly relied upon. But the mist above the water obscured it for several moments, which was a little frustrating. However before long it did appear in exactly the predicted spot and we started to photograph.

Does this all sound rather clinical? Well don’t let it spoil the feeling you get from the image, but use that litany of preparation above to help you appreciate all the more the wonderful successful images that you see on G+ and know that most of them were not captured by serendipity. They involve careful and painstaking preparation in order to avoid as much of the frustration as possible. Yes, things can always be different from what you had planned. If the night had been overcast we might have simply not got the photographs. And had to try again. But we had a plan and knew what we wanted. And that was the best place to start! 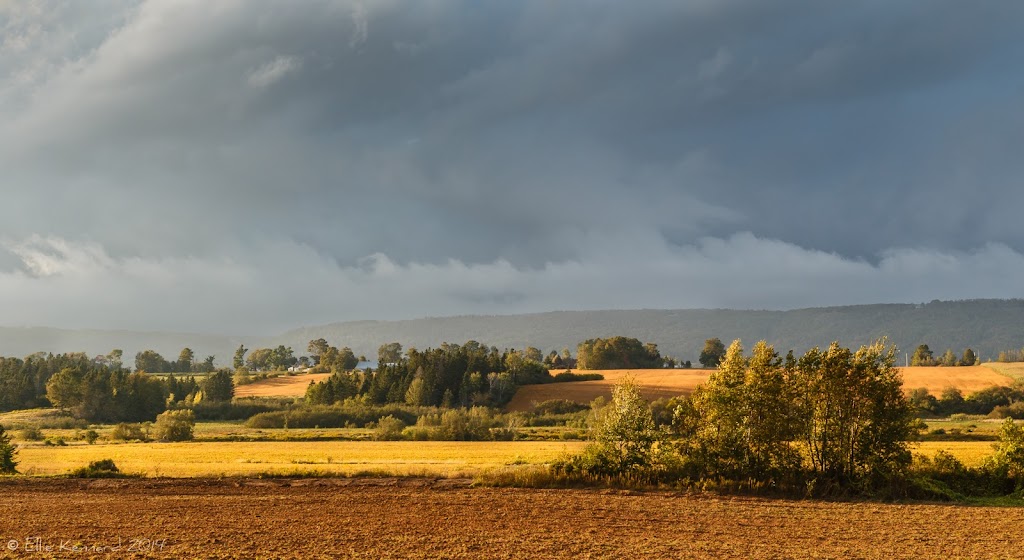 There are moments when the light is special in that 'Golden Hour' before sunset or after sunrise and it filters down between the clouds in a darkening, heavy sky. At times you see this light and you can't do anything about it. Perhaps you don't have your camera, or there is just no scenery to feature. Or maybe you are in heavy traffic and can't get out without creating a hazard.

On this day, I was coming home and saw these golden and darkening conditions developing in the distance. I drove past my favourite farm, but the light wasn't going to hit it. I kept driving and watching. As I came down towards Hillaton, I saw the clouds becoming heavier over the North Mountain and the mist settling on the hills beneath, all the time I was driving and watching for the scene that would be the one.

When I saw this, I pulled the car quickly around the corner onto the hard shoulder (light shifts rapidly in this situation, I didn't want to lose it) and, grabbing the camera I jumped out of the car, all the time clicking the shutter at the scene, just in case the light changed and I lost it.

Soon these trees will be turning wonderful colours of red and gold, but now the fields are gold with harvest, surrounded by the deep greens.

Of course this has to be shared for #farmfriday +Farm Friday by myself and my co-curators +Steven Kennard, +Susanne Stelle and +Alessia De Bonis as well as these other great themes: 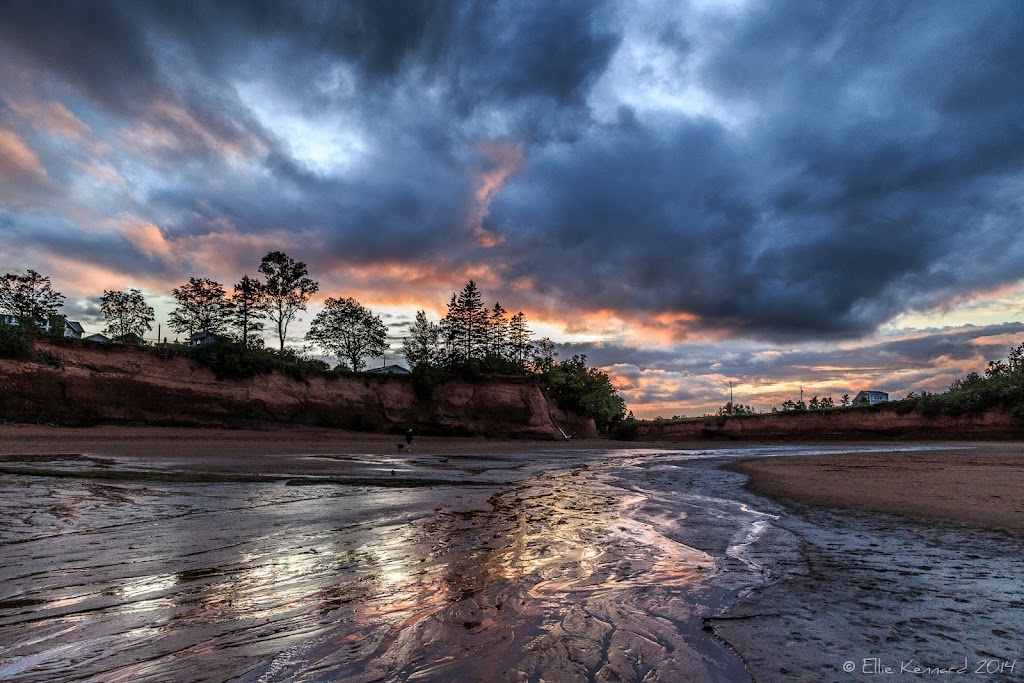 With such low and high tides as we have here, I have found myself both scrambling to dry land up the cliffs on the rocks (as in the other day) and walking far out into the Bay of Fundy on land (not very dry) which is, twice a day buried deep under the waves.  I have even felt disturbed at the thought, wondering if I might end up sucked down into a sinkhole, never to be seen again. I was having just such thoughts the other evening as we were out walking Joni, when I turned around and saw the sky. The rivulets running down from streams that come from those cliffs reflected the clouds and evening light and colours, drawing my eye up to the land and then that dramatic sky.

Are you not able to comment on Google+ because you don't belong? Do you prefer to comment on my blog? It's right here: http://www.elliekenard.ca﻿

On the Monday after the ice storm, the renovation work was in full swing and I had a lot to do and only renovation work to document. So I am harking back to the Saturday night before, on our lovely evening drive through the snowy Annapolis Valley, on our way to the concert in Margaretsville in the Evergreen Theatre (+Evergreen Theatre) . I intentionally blurred the images of the road and landscape as we drove through it, to just give an impression of this journey. The sun was setting in a haze behind the clouds. 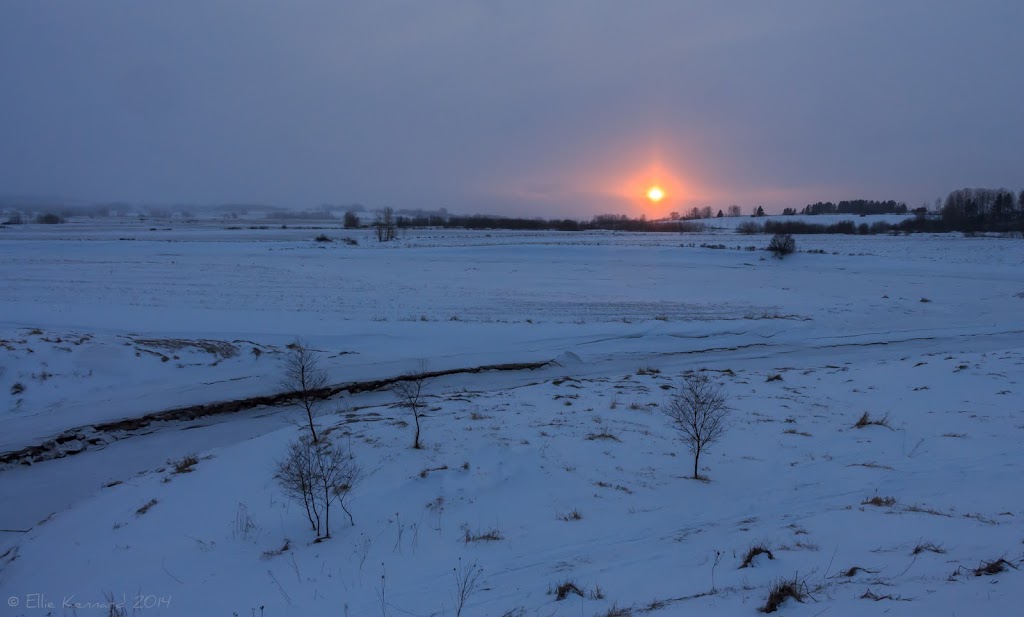 The sun was setting as we were coming home last evening and so this scene was a gift to me. I have been so busy this week that I have had little time to do everything I want. So when this image came into view, I jumped out of the car and took the photograph. It is looking across the dykes in Nova Scotia's Annapolis Valley. The sun as it set almost looked like a red torch (or flashlight) beaming up from the horizon. By the time I stopped to get this, it had changed, but still was lovely.

“The Harvest is Almost All in”

To remind all you good folks that tomorrow is once again #farmfriday  , I am sharing an image of a field you have seen more than once – featuring the tractor that was harrowing, the lines of the newly sprouted corn etc. This time you can see that the harvest is well under way, the fall colours behind showing the urgency to get everything safely put away before winter sets in.

We on the Farm Friday team are all looking forward to seeing your great images of farm life from around the world, shared with our theme. 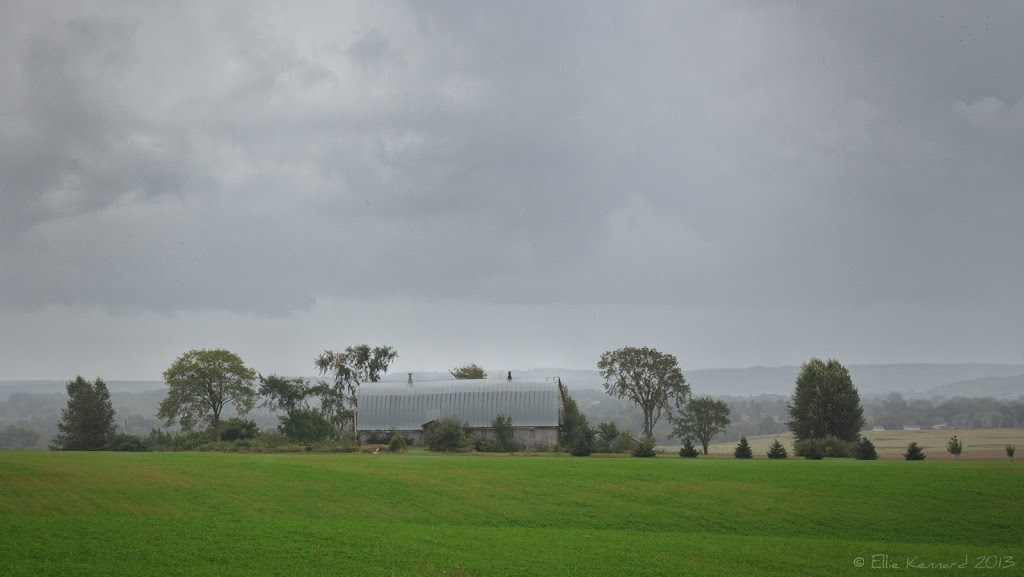 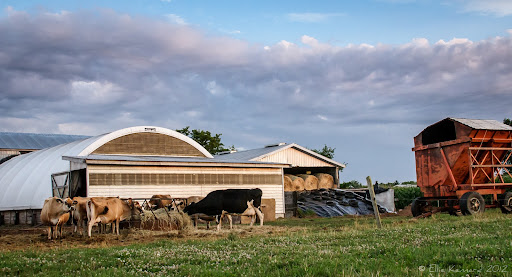 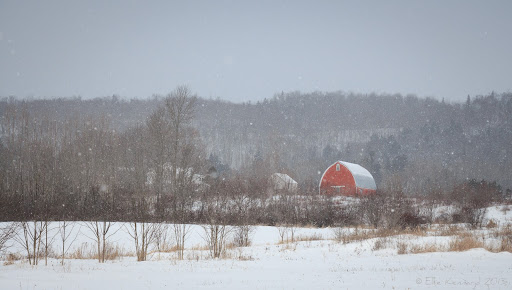 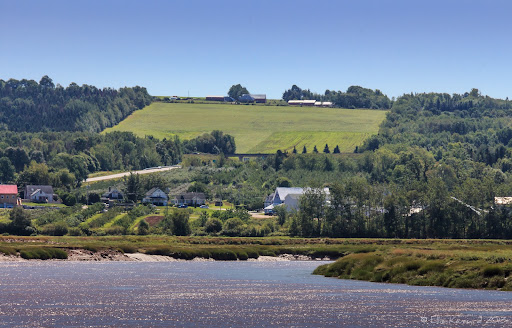 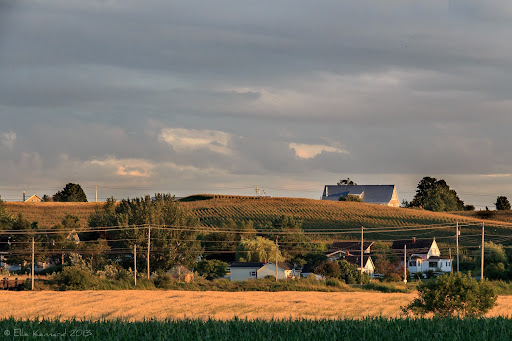 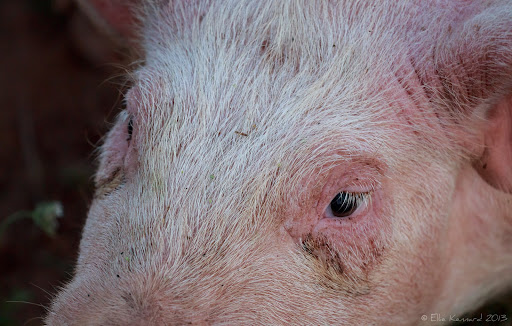 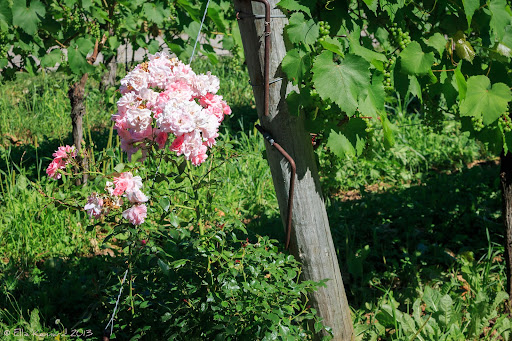 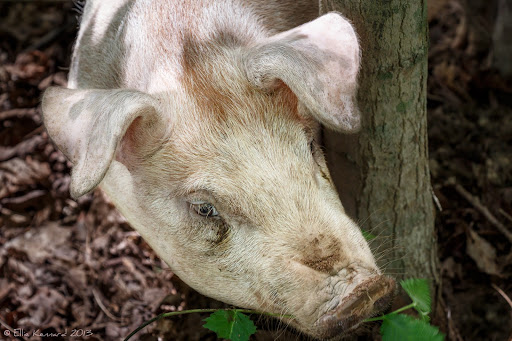 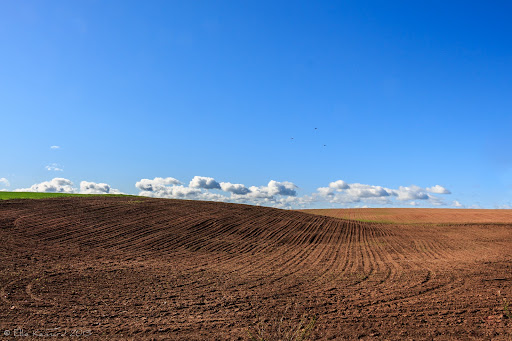 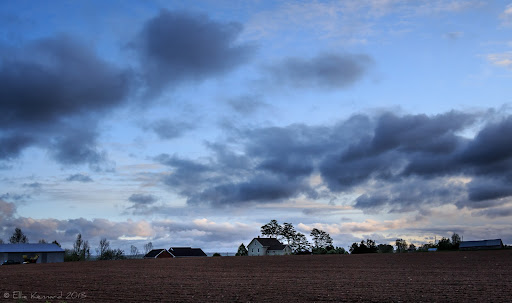 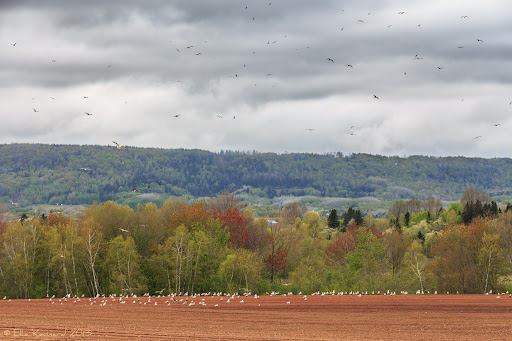 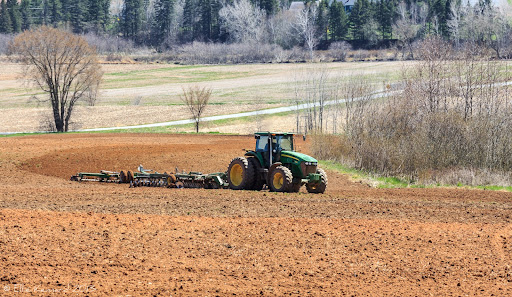 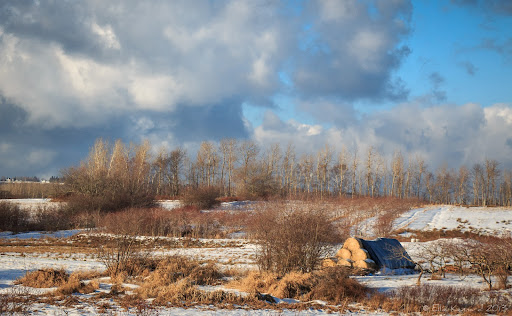 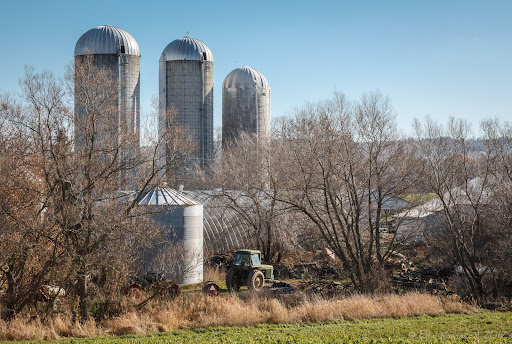 Reminder! Farm Friday is just around the corner! So if you can get out and photograph a farming related subject near you … if you're in the city, have you a farmers' market you could share with us? And if you can't get out why not dig out the farm photos you took a while ago and dust them off ready for our #farmfriday  theme tomorrow. If in doubt as to how to post to our theme, (curated by +Steven Kennard – our farm Friday manager, our European farm girl +Sofie Løve Forsberg and myself) then nip over to the page (+Farm Friday)  and read all about it on the About page!

Every time I drive along the road and see this farm with its beautiful old barn, I want to photograph it. I have taken photos of it from most angles and in different seasons and I love it more every time I see it. Here you see it in the wind and rain of early fall.

See you all tomorrow! Happy farming. 🙂

I thought this might be a fishing weir, but I’m not sure enough. Maybe someone will tell me.