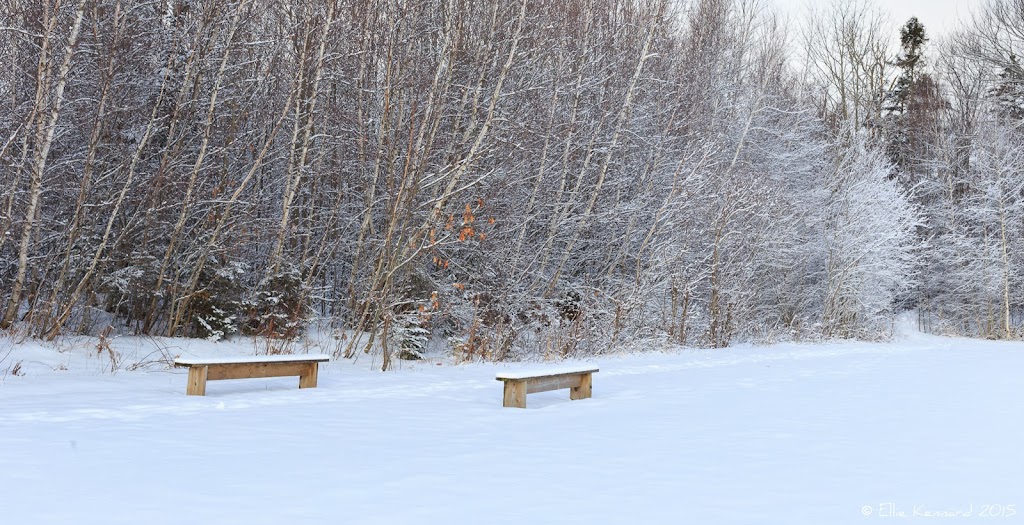 Winter walks with Joni give a different perspective on the weather. Today's walk was, as it turned out, almost a bad idea. We were not in a civilized park, with benches and neat paths, but were walking along the side of fields, through woodland, over streams and past orchards. We have had a few winter storms lately so there was a fairly deep covering of snow, but the snowmobiles usually keep paths at least visible and flattened for walking. The weather took a bad turn as we set out but we decided to keep going. It began to snow and the wind picked up so that we were being battered by hard icy flakes.

Everything froze into icicles with our breath. Joni had icicles dangling from her whiskers. Although we were warmly dressed, the icy wind hitting our faces was pretty unpleasant. I had a thought as I was struggling along against the wind, that this is not really what most people imagine when they think of a walk in the snow in the country.

Fortunately for Steven and me we had snowshoes so we were able to walk fairly easily over the drifts that had built up on our way back, but our friend Linda did not and sank up to her knees where it had not been deep as we passed it earlier. The conditions were almost white-out and at times I was looking for Joni's black body in the white to show me where she was sitting waiting for us as I knew she would be on the path. She was waiting for me to throw her the ball. As she sat there, caked with snow and icicles, she seemed completely oblivious to the weather. Particularly bitter blasts of freezing wind and snow just made her turn herself so her back faced the worst of it. That walk was an interesting hour and a half! The drive home was equally exciting as the drifts were blocking sections of the road, but we made it back safely.

The photo below is probably more representative of what most people imagine as a pleasant late afternoon walk on a snowy winter day. It's all part of a Canadian winter.