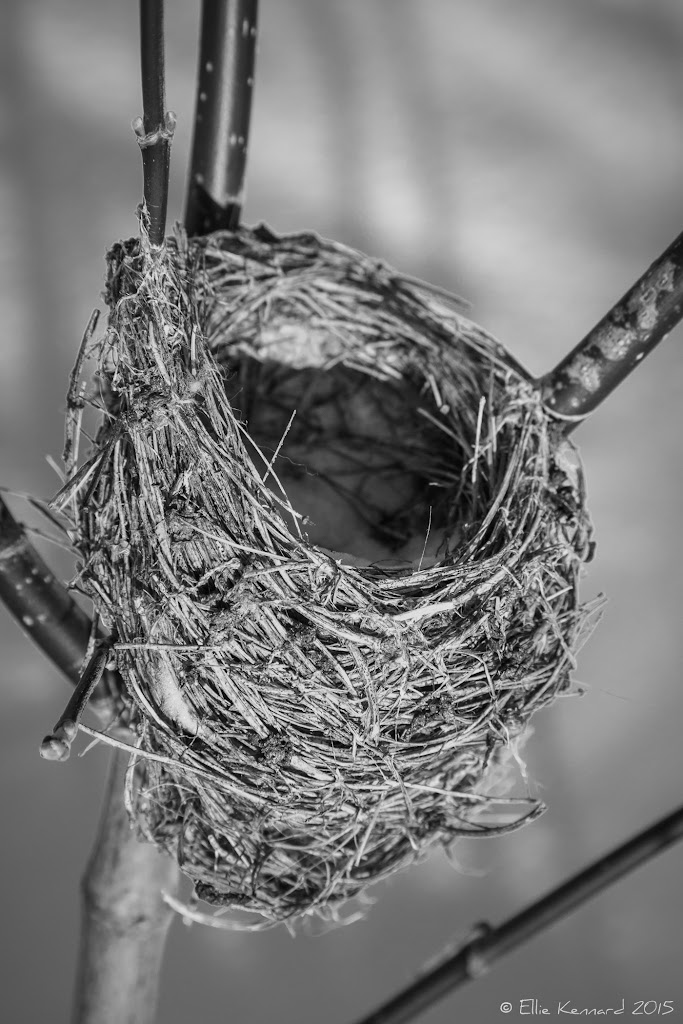 I have had a long time mystery solved by getting a photograph for this theme. Over the past few years, in the summer I have been hearing a sound a bit like water gurgling down a drain, coming from one of the large trees in front of our house. I even tried to record it so I could get someone to identify what was making the noise. I never was able to spot the bird or work out what it might be.

The other day while walking through the fields, over the snow which is now about 3 or 4 feet above the ground, I spotted this nest wedged neatly in the fork of this tree. I was photographing it as it looked so intricate, finely woven and yet somehow sturdy, and the film title "One Flew Over the Cuckoo's Nest" came to mind. The film had nothing to do with birds, of course. That didn't stop me from making that association and so when I came home and was working with it, I wondered if they even have cuckoos here. I got out my trusty iBird app ( +Fraser Brooks​ AKA Bigfoot) and searched for Cuckoos in my area and, sure enough, the black billed cuckoo is indeed found in Nova Scotia. I played the sound on the app and there it was ! The water gurgling down the drain sound! It was nothing like the cuckoo calls I knew from Europe, which is why I had not made the connection.

For those who don't know, cuckoos do not make their own nests, they lay their eggs in the nests of more industrious birds who then, all unaware of the invasion, raise the hatched cuckoo in with their own young. If the host bird is small the growing cuckoo will gradually push out all of the legitimate young from the nest and grow to its comparatively monster size at their expense, exhausting the confused parents while it does so. So every nest is a potential cuckoo's nest.

I went back a day later (after another snowfall and bout of windy weather) and the nest was gone. Just a bit of the bottom was left firmly attached to the base. Hopefully that will serve as a base to build a new one for the season soon to come. And maybe a cuckoo will lay an egg in it. It will be too high for me to be able to see it so well and hopefully to keep it safe from ground predators.